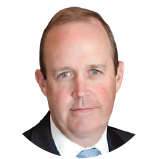 The early years of Mr. Taylor’s career began at PricewaterhouseCoopers (PwC) —first as a Senior Associate in the Real Estate group within Financial Advisory Services practice, then as a Manager.

After PwC, Mr. Taylor joined JPMorgan where he worked in nearly every aspect of the securitized commercial real estate debt business. During his 10-year tenure, he contributed to $8+ billion of CRE transactions, was named co-head of the Atlanta office, and later promoted to Executive Director and Head of CMBS Underwriting for the East Region of the U.S.

Mr. Taylor spent two years as Head of Acquisitions for Reynolds Capital Group before joining A10 Capital. As Principal and Executive VP for the start-up lender, he sourced and closed $200M+ in loan volume and was among the top performing originators of CRE Bridge Loans for four years straight.