• I spoke with 2 industry experts on the state of the lumber and housing market.

• Both industry experts agreed that it’s more a demand story than a shortage of lumber that’s driving prices higher.

• Lumber prices should come down in due time as more supply becomes available to meet the soaring demand.

• Great optimism for a major change in trend that could very well be multi-year for continued housebuilding boom.

Just last week, prices for 1000 board ft of soft pine shot up again likely as a result of very strong new housing permits suggesting even more demand for the lumber. This is the 3rd time since last Summer where prices are approaching about $800 per 1000 board ft of lumber and have now broken above it. 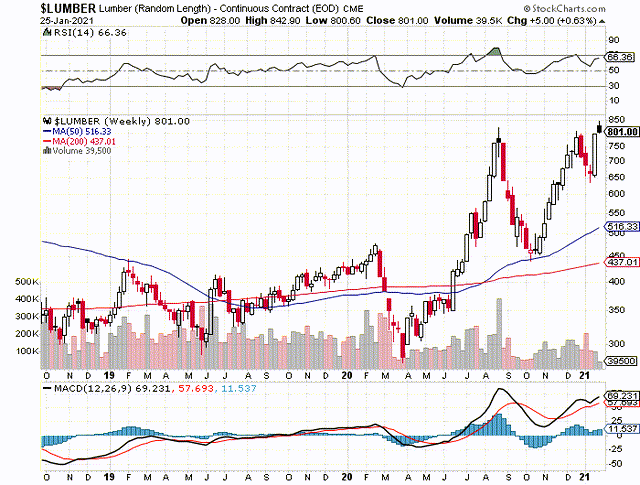 To gain a better understanding as to the state of the housing industry and lumber prices, I recently spoke with 2 industry experts to get their perspective on the current situation.

Both shared a very similar perspective of what’s driving prices of lumber higher and that was demand. I was able to gain their insight into how they see the market adapting to both soaring demand for framing lumber and the record high prices we’re seeing today.

Before I get into their thoughts, I want to share this long-term chart below showing new private housing units authorized by permits.

From what I observe, we’ve been in a homebuilding bull market since about 2012. Homebuilding permits were soaring in 2019 before the pandemic conditions changed the demand picture even more so. So this is more of a continuation of a strong housing trend that has now been made even more bullish on a new trend which is based on more people working from home as well as moving away from large cities.

On a positive note, this is a very bright spot in today’s economy.

I was able to speak with Joe Sanderson, managing director of natural resources at Domain Timber Advisors, LLC, an SEC-registered investment adviser and a subsidiary of Domain Capital Group out of Atlanta, Georgia.

One of the first things I asked Mr. Sanderson about was the supply situation of lumber for the homebuilding industry as I had written last month about potential shortages. He noted that it was more of a regional problem but it was not affecting the Southeast of the US. He pointed out to me that the weather has been favorable in the Southeast and that has helped keep supply of timber strong. The main issue affecting lumber and lumber prices was demand, particularly for housing he suggested.

When I asked Mr. Sanderson about the capacity of the mills being able to meet the demand so that shortages don’t become a factor, he noted that mills have in fact increased their capacity and should continue to do so.

For the time being, with lumber prices so high, the cost to build a new home is about $15k – $20k more than it was a year ago he told me. This time last year lumber was trading between $450 and $500 per 1000 board feet, whereas now it’s closer to $800. Mr. Sanderson suggested a more reasonable price in the current market should be closer to $600 – $650. In other words, we’re not likely to see prices go back to where they were 1 year ago. So, while prices can correct from here, they are probably less likely to fall below the $600 range over the coming year.

I think this is good news to see the market adjusting itself to meet the current strong demand.

At the same time, Mr. Sanderson pointed out to me that the US had reduced the tariff on Canadian imported lumber from 20% to 9% back in December. Back in 2017, the US put tariffs on Canadian lumber imports. This too can help contribute to meeting the demand for lumber to build homes in the US.

Ultimately, Mr. Sanderson remained optimistic about the foreseeable future of home demand as those in the millennial age bracket (age 24-40) coupled with a major change in trend of being able to work from home has created strong demand for housing that should continue into the foreseeable future.

After I spoke with Joe Sanderson, I was able to speak with Anna Lowder. Ms. Lowder is a co-founder and developer for a unique community known as new urbanism called Hampstead in Montgomery, Alabama. She oversees the development and sale of new homes built in the community.

Like Mr. Sanderson, Ms. Lowder sees a major shift in trend in the homebuilding space. Demographics, millennial buyers who make up first time home buyers, coupled with this shift of working from home are both helping drive strong demand for her community. She also noted strong demand for houses that could accommodate multi-generation households as well.

When we talked about lumber prices, Ms. Lowder made the point to me that for the standard new home, the price of lumber has gone up from about $17k to $30k to frame a house putting a lot of cost pressure on the developer.

To get around this increase in lumber prices, there is less of a rush to buy wood at elevated prices. At close to $800 per 1000 board ft, she’s willing to build the foundation but hold off on the framing until prices drop if the house is being built to spec vs. a buyer having a custom home built they have already prepaid for.

I thought that was a good point and how at current prices, builders may well be waiting to build. This attitude of homebuilders can help contribute to prices falling back to that $600 – $650 range in the near future.

Much has been in the news about shortages and I asked her about her experience in getting wood or other materials to build a house. She noted that wood can be had so long that you plan ahead. However, for other building materials, most certainly, it’s been more challenging. Everything from tiles to windows, hoods for stoves, shower doors and appliances, have created a situation where she’s had to be strategic about making sure she could have materials and appliances by buying ahead of time and working more closely with suppliers.

She did note that there was some shortage of lumber in the August to September time frame, but not so much now. For now, it’s the pricing that is the concern.

As for other factors that could affect the housing market, she suggested that if there was to be any student loan forgiveness, that could really help millennials burdened with college debt to be able to afford a new home.

I’m thankful for having the opportunity to speak with both industry experts and get their take on the current state of housing and the lumber market.

What I got out of it and what I think investors should take from this is that this is indeed an exciting time for the homebuilding industry and any other business that serves that sector. Fundamentals are strong and should remain strong for the foreseeable future.

High lumber prices and shortage of various parts and commodities are a reflection of the current state of strong demand for new housing development.

Lumber prices are therefore likely to remain elevated from previous years prices as a result. So long that weather remains favorable and new capacity at mills continues to be added, supply of framing lumber should not be as big of a concern.